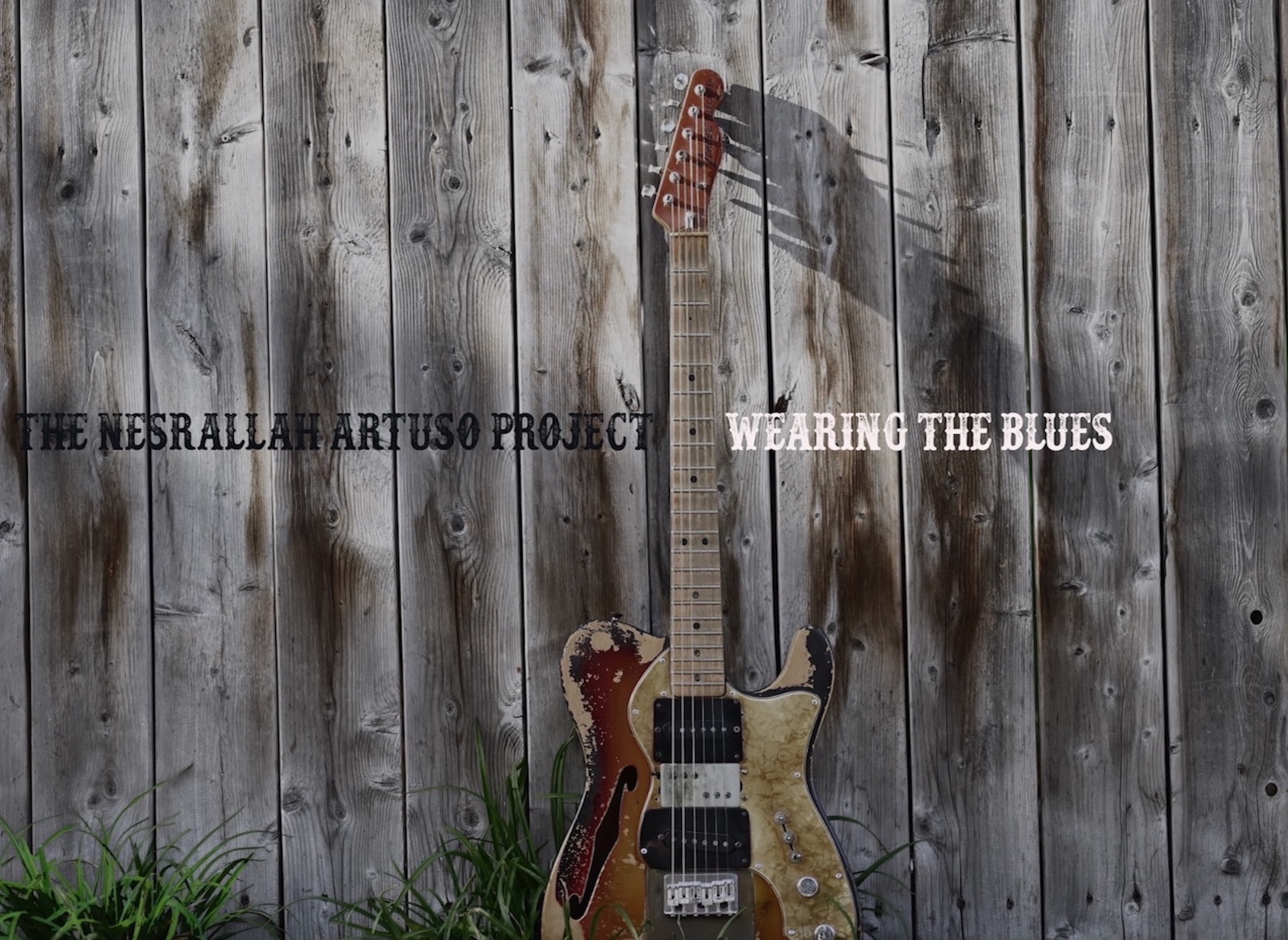 The  highly anticipated  Nesrallah Artuso Project "Wearing The Blues" , Enjoy the stream , download tracks and buy the album. All  tracks produced, composed, arranged ,recorded, and performed by Victor Nesrallah and Danny Artuso, recorded at Studio Artuso Stiittsville and mastered by Grammy nominated Philip Shaw Bova .  Featuring ten songs in the tradition of the Blues , stellar performances all around featuring  guest performances by Lynne Hanson, Billboard's top 100  on the title track "Wearing The Blues", Juno ward winning Guy DelVillano stompin barrelhouse piano on "Confused" and Shelley Garrison Artuso background vocals .     Only on Bandcamp  for now so leave a note on the bandcamp page or  drop a line to nesrallahartusoproject@gmail.com.

When you listen to Victor Nesrallah speak it's an education, when you listen to this album the teaching goes further, he has immersed himself in many cultural styles of music from a very young age, and this release is a wonderful showcase of his journey so far. Not only a multi instrumentalist with a mastery of the guitar, he is a sought after producer and has worked on many independent releases in the Folk, Jazz and World Music genres, an award winning singer / songwriter he has been entertaining audiences with his unique blend of Roots, World Jazz and Blues Fusion at festivals and small venues winning new fans along the way.

Placing tracks on an album is an art form in itself, and I can only imagine the depth of thought that must have gone into this project, with a dozen recordings to date there was a wealth of material to choose from, Victor wanted to give a broad spectrum of the varying styles of music that he has composed and in my opinion he has struck the balance brilliantly on ' Collections ', he has to be highly commended for that.

Influences growing up included middle eastern ensembles, jazz collectives, folk music right through to rock and roll and the Beatles, he played woodwind and brass instruments at school, going on to obtain a degree in Jazz performance which have all shaped his journey.Stand out tracks are many, I am highlighting three that are all different, but fit seamlessly into the collection of fourteen tracks, and that in essence, demonstrate the beauty of the recording.

' The Hills Of Liban ' is a song that reflects an experience of a visit to Lebanon, it's also a commentary on the state of the country, it references historical and geographical places, honest thoughts on the political and religious ideologies that have left the country in turmoil throughout the ages, realizing that everyone is not free in such a bountiful country.

' Forgive and Forget ' is a fingerstyle composition which captures well how Victor performs live as a soloist, it has a rock steady bass string beat throughout which is hugely compelling to listen to, his vocal style is mesmerizing creating a superbly crafted track.

' Blood From The Stone ' is an ensemble piece with beautifully arranged orchestrated parts featuring some amazingly talented Arabic musicians including virtuoso violinist Rabih Yazbek from Beirut.

I am in wonder at the way this album crosses many musical boundaries yet nothing is lost or out of place, it truly is a fabulous collection of music, Victor Nesrallah continues to educate the more I listen, I'm sure there will be other recordings to come and I personally can't wait, but until they do I am perfectly happy to press repeat on this one, Victors music certainly knows no boundaries.

I am a big fan of Victor Nesrallah ever since being introduced to his music via ' Collections: Roots, World, Folk, Blues ' and on this his latest release ' Once A Rebel ' he has not disappointed. It's another showcase of stellar songwriting, gritty performance and amazing musicianship.

For those not aware of his music I'd highly recommend tuning in to this collection from Ottawa based Victor Nesrallah, Victor’s compositions have been praised for their originality and hard-hitting message . A multi-instrumentalist with a mastery of guitar, comparisons range from Keb Mo' to Harry Manx and Bruce Coburn. He draws from the roots and world traditions to inspire his writing, arranging and live shows.

Victor's roots lie in folk and country rock, he stays true to that foundation of his musical past on this release and once again crosses genres with songs that fit seamlessly together with hints of swamp blues, americana and even a touch of bluegrass with celtic tinges on tracks with banjo and fiddle work being provided by Keith Snider, an Ottawa Valley mainstay in bluegrass circles and current bandmate.

This release really showcases the strengths of his arsenal, a great composer, wonderful arranger who has a fabulous ear for harmony., and one component that draws you in further is his art of storytelling. Each song has an element of telling a subjects story as with ' The Lion The Sheep and the Self Made Man ' based on the life story of his grandfather Alex, the song portrays the struggles of early nineteenth century immigrants to Canada, or the rendition and remake of his brother Stephan’s folk rock tune ' Lonely Times ' which portrays the struggles of life on the road for any travelling songwriter.

If blues is your thing then ' Once A Rebel ' gives a whole lot of bang for your buck with tracks paying homage to fingerstyle blues in the style of Mississippi John Hurt capturing the essence of that tradition with two ballad-like renderings in ' Driftin ' and ' Low Down Blues '.

There are ten tracks on the album, it's thoroughly captivating from start to finish with a magnificent blend of compositions, it's well produced as we've come to expect from Victor and each time I've gone back to listen I find another facet that I had missed previously.

A highly recommended release that will pull you in with intrigue throughout, the lyrical content is compelling and the musicianship and arrangements are top class. ' Once A Rebel ' might just be his best release to date. 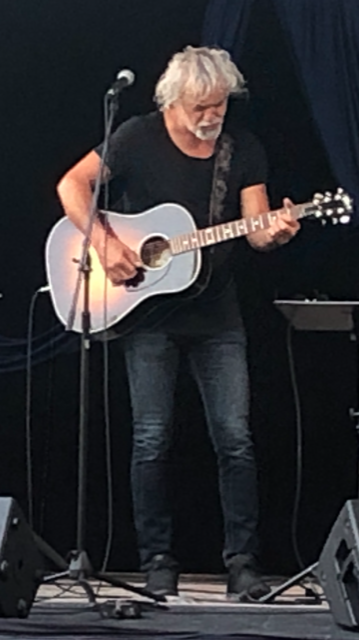 Victor is performing a Live Stream concert via facebook live Thursday June 4th 700pm -800pm EDT  Tune in to hear this intimate solo show featuring some new material from a forthcoming release and songs from Once A Rebel and Collections. Here's hoping y'all tune in.

On Thursday April 16 Victor gave his first live concert stream Liftin the Spirits live to hundreds of viewers via facebook live, In case you missed the concert click  the link below and enjoy the concert. Victor dedicated the show to first responders worldwide in the fight against Covid 19 pandemic. Artists worldwide are streaming concerts in an effort to provide entertainment and relief to all  during this period of self isolation. Musicians and touring artists who perform live and for many have lost their primary source of income   as a direct result of the pandemic and the closing of live music venues locally  worldwide. Musicians and artists alike   are accepting  donations to provide a means of sustinance through this global pandemic. If you want to make a donation which is entirely voluntary and tremendously appreciated  do so via etransfer to victor@freeflyingmusic.com or purchase CDs directly from this website at the store.

A pair of stellar shows marked the start of 2020 drawing great comments and testimonials from attendees, Victor performed at the Atomic Rooster in Ottawa with special guest Michael Ball on violin and mandolin, Jan 11th kicking off  the 10th anniversary of "The Allaire Show" Victor was the featured artist and special guest musician  along with host John Allaire at Quinn's in old Ottawa South. Comments from patrons included "Adip's Blues" really hit home and " Your Tribute To the Teacher is a beautiful  song".   Sales and downloads of Victor's 2019 release  Once A Rebel continue to do well. Please check out the music page . 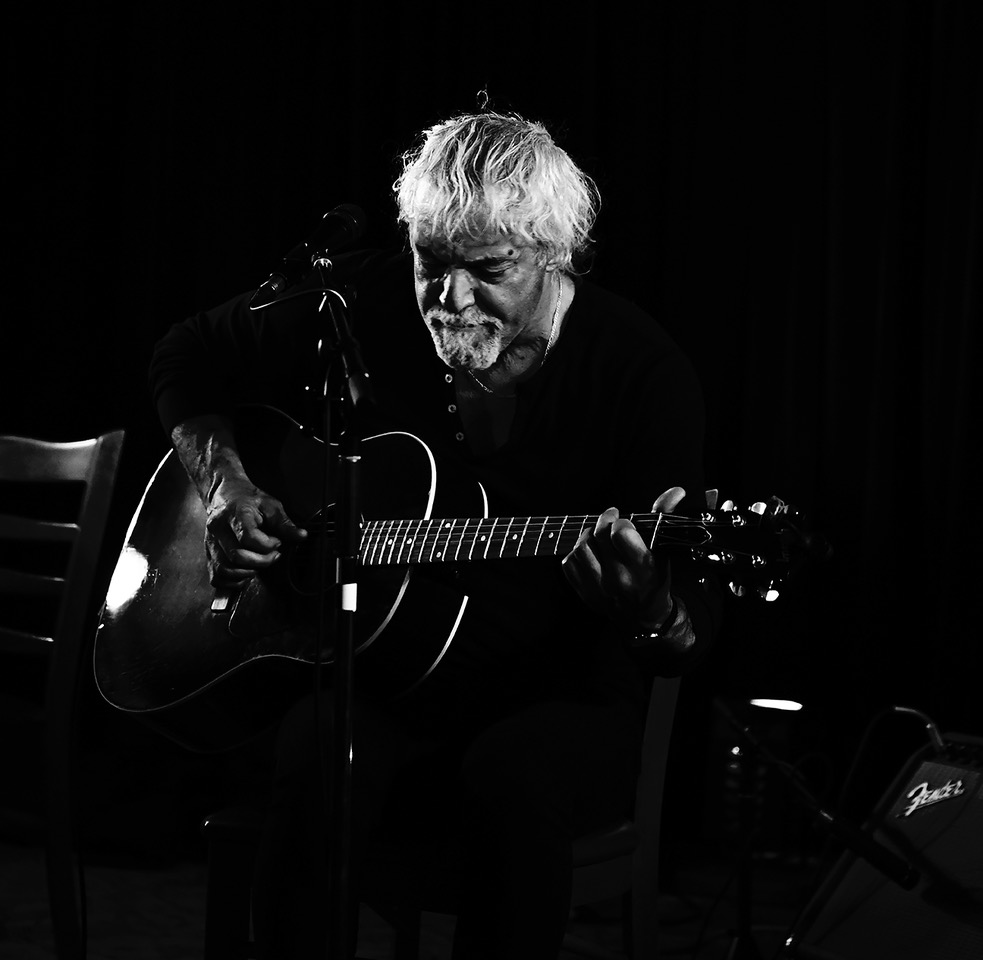 Victor Nesrallah will be hosting Thursday October 10th The Stellar Cast Blues  Showcase at Irenes Pub Ottawa  with  very special guest friend and foremost musician  Danny Artuso on guitar . backed by Corkey Kealey drums and Chris Breitner bass  mark this one as a must see event. 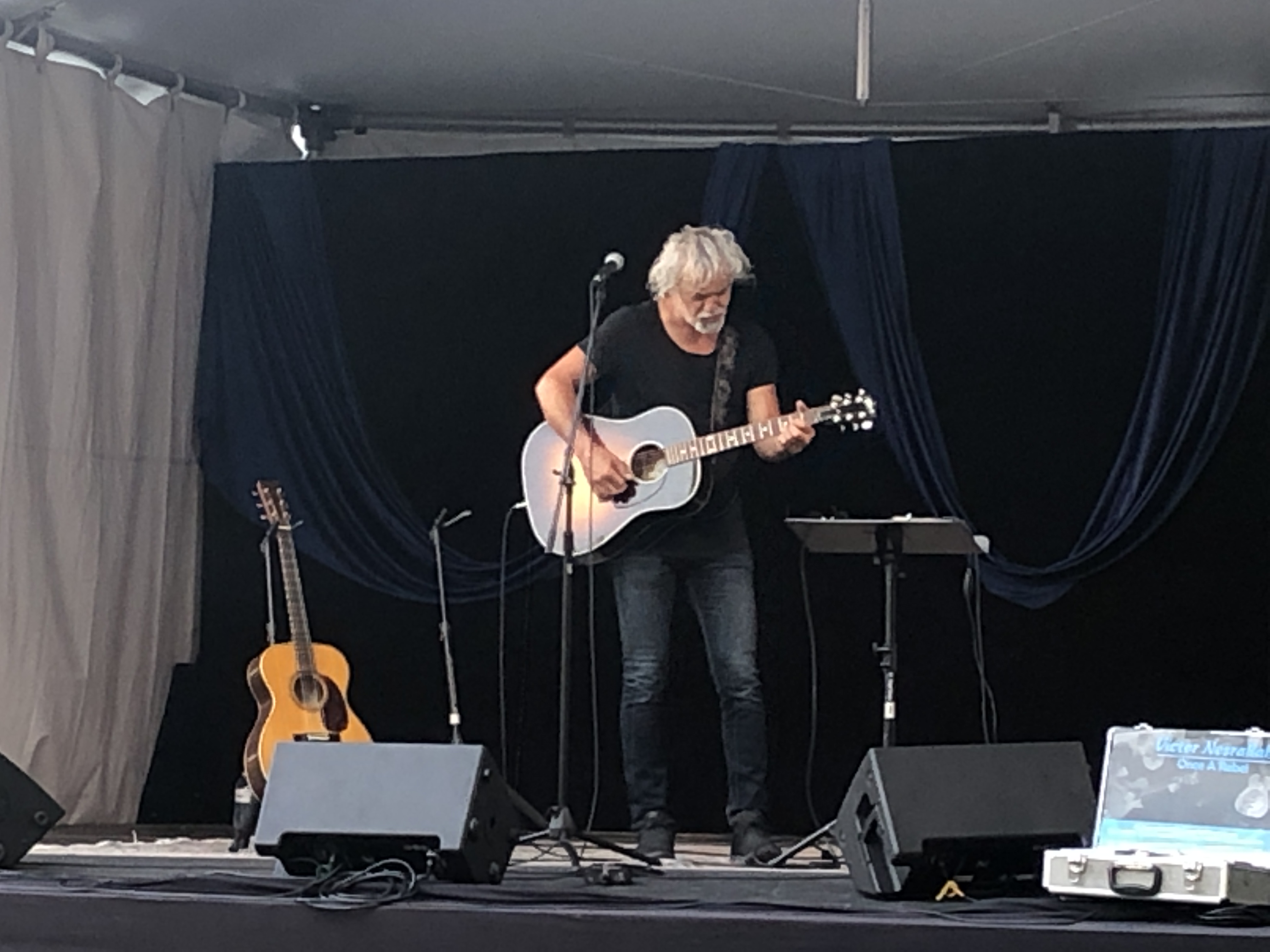 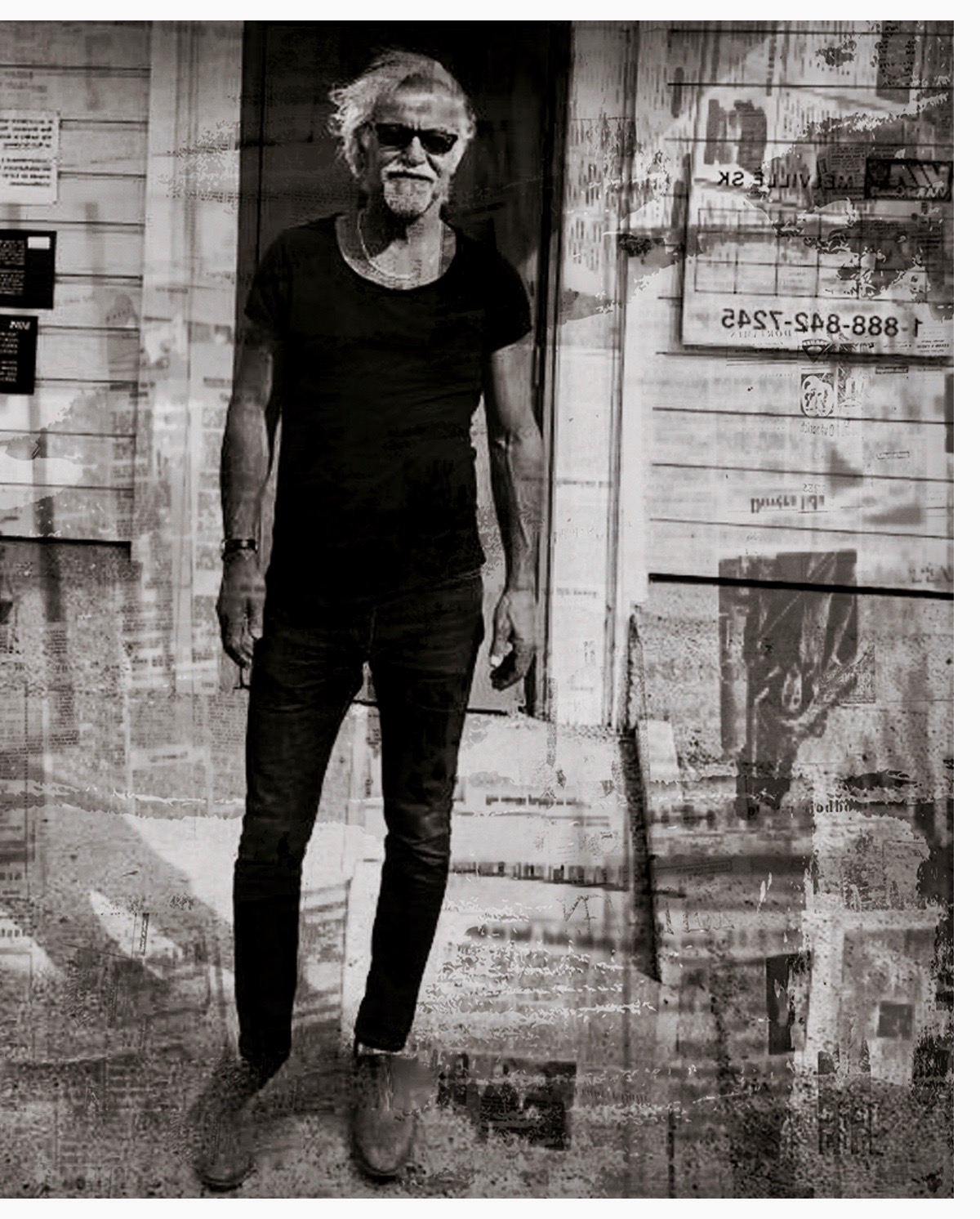 Making a return to the Canada's west coast  Victor Nesrallah kicks off his Unsung Unsigned B.C. Tour July 31st with a performance at the "39 Days In July Summer Music Fest" in Duncan Vancouver Island . With shows  in Victoria  and Penticton and more shows to be confirmed  stayed tuned to the newspage for updates.

Lending  his production skills   for  the Victoria based folk duo  Beautiful Luck ,  Victor will be  recording and producing their debut EP scheduled for a fall release.The Victoria based folk duo of Sue Black and Carlo Lefebvre  blend great harmonies performing  covers and originals and will be a good fit for the veteran Ottawa producer who loves working with  artists who have   an appreciation for the voice.  "Their strong suit is vocal harmony and one of my strengths as a producer is arranging  harmoniy which brings out the best in a song."

"Victor gives a  performance at Unversity of Victoria   August 12th

Recording Beautiful Luck wrapped  up August 18th  Returning back to Ottawa to finish overdubs and mixing to begin Sept 1.